Wild Boar Wood Campsite near Horsted Keynes is a great Ashdown Forest camping option. It is just a short drive from our off-grid campsite to the Ashdown Forest where there is much to explore…

Situated at the heart of the High Weald Area of Outstanding Natural Beauty, the Ashdown Forest is made up of wooded areas and heathland. It is the largest area of open heathland in southern England, accounting for 2.5% of the heathland in the country. The rolling hills of the landscape are often cut with steep-sided ghylls and streams. In autumn and winter the heathland is often shrouded in mist. In summer the heather blooms and attracts wildlife. The human history of the forest includes agriculture but also manufacturing as a base for iron work, smelting and timber production. Unsurprisingly, in Norman times as a deer hunting forest.

The forest is just thirty miles south of London and stands on the High Weald’s highest sandstone ridge. This means that there are some stunning vista points along the routes that cross the forest. Particularly from car parks on the B2026 and Colemans Hatch Road. The Ashdown Forest Visitors’ Centre is also located on Coleman’s Hatch Road. From here you can buy walking maps and get advice on the area.

More recently, some of the spots in the Ashdown Forest were used as the basis for the Winnie-the-Pooh stories. You can visit some of the places that are thought to have inspired the stories including the ‘real life’ Pooh Sticks Bridge.

The first Winnie-the-Pooh story was published in 1926. This was just a year after AA Milne bought a farmhouse in Hartfield on the outskirts of the Ashdown Forest. AA Milne said he based Pooh on a teddy bear belonging to his son, Christopher Robin, who also features in the stories. The other characters were based on other soft toys owned by Christopher Robin.

The real places that inspired locations in the stories are identifiable by the descriptions, illustrations by EH Shepard and the names that AA Milne chose which tended to be similar to the real place names. These include the Hundred Acre Wood from the stories, which is Five Hundred Acre Wood in the Ashdown Forest. As well as Galleon’s Leap in the stories which is Gill’s Lap in real life. You can also visit places which are identified as Eeyore’s Gloomy Place, Roo’s Sandy Pit and The Enchanted Place. The best-known is perhaps the Pooh Sticks Bridge. This is where Christopher Robin and Pooh played the game which is now popular all over the world.

The bridge, which has been rebuilt to look like the bridge in the stories, is close to Cotchford Farm, the Ashdown Forest home of the Milne family. It is probably the most popular spot to visit in the forest. Visitors can park up in the closest car park and enjoy a walk of about a mile to the bridge itself. 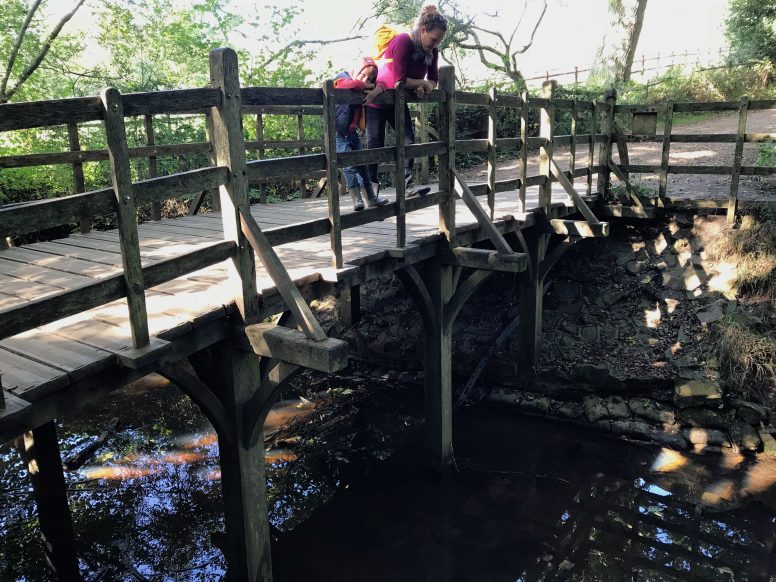 There is a subtle memorial to AA Milne and EH Shepard close to The Enchanted Place in the Ashdown Forest. See the walking map mentioned below for details of how to reach it.