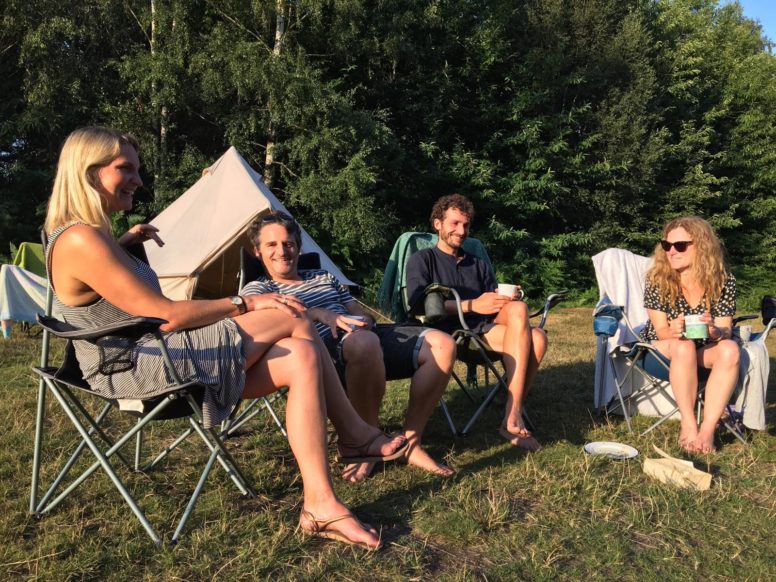 An oldie but a goody – also known as 20 questions. The person in the hot seat first thinks of a famous person or character and then everyone else takes it in turns to ask questions that can only be answered with yes or no and tries to determine who the person is thinking of. Guess incorrectly and you’re out, get it right and you win.

Not as noisy as it sounds – think of a theme and then take it in turns around the campfire to come up with a song or band which contains the word or theme. For example “heaven and hell”: Heaven knows I’m miserable now, Heaven is a place on earth. You lose the round if you can’t think of one.

Good for groups looking for camping games for adults and for those who don’t mind being put on the spot! Divide into two teams and for each round nominate a team member who has to try and keep a straight face while the other team does everything they can to make them laugh. Bound to make you feel better!

This one is in the kid’s list – but it’s so good, it deserves a place in this list of camping games for adults too. Set up a grid using sticks and place collected items from the woods in the boxes instead of noughts and crosses: leaves and acorns, for example. The adult version could be made more difficult by stretching it to nature connect four!

Another game for a group and one to be played while sitting in a circle so just right for the campfire. Can you remember the rules though? Everyone bar the nominated leader of the game closes their eyes and they walk around the circle and tap one person on the shoulder. That person is the “murderer”. Everyone is instructed to open their eyes. The murderer proceeds to “murder” their victims by winking at them – but they must try to do so without being spotted by anyone else still in the game. If you are winked out you are out. If you are still in you can only win by spotting the murdered before they wink at you.

This one works best for a group who don’t know each other too well and is often used as an icebreaker at corporate events – but don’t let that put you off! Everyone thinks of a fact about themselves or something they have done (the stranger the better) and also comes up with two lies. Take it in turns to state your three “facts” and have everyone guess which is true.

We’ve also got suggestions for rainy day camping activities, campfire cooking and a guide to the wildlife and birds you might spot in our campsites – all great camping activities for when you visit our woodland campsites at Wild Boar Wood or Beech Estate.