Telling stories and catching up around the campfire are some of the great things about life at our campsites. All of our sites allow campfires and we sell wood on site so you can cook, toast marshmallows and enjoy a bit of what we call fire TV. Once you’ve got the flames roaring, it’s the perfect time to tell a few jokes about camping. Just in case you don’t know any we’ve brought together our top camping jokes… 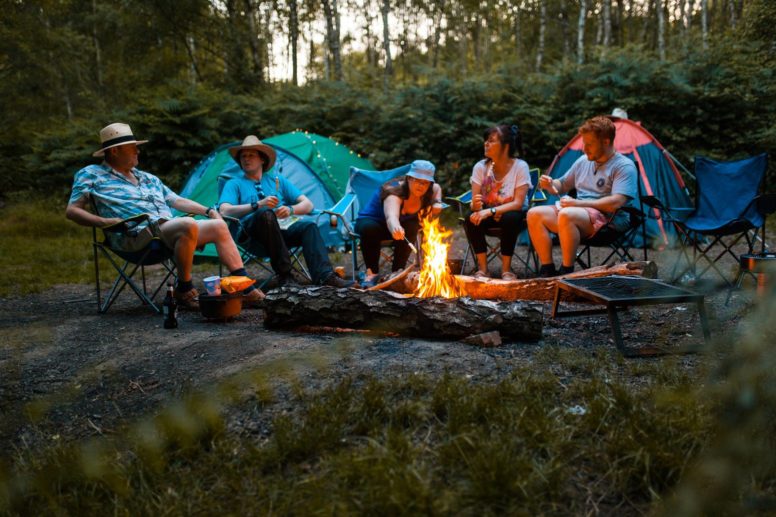 Our top jokes about camping

Q: Can a frog jump higher than the average tent? A: Of course, tents can’t jump.

Q: What’s another name for a sleeping bag? A: A nap sack.

Q: Why did the camp warden quit his job? A: Because it was always in tents.

Q: If you’ve got four tents, eight sleeping bags and six camping chairs in your wheelbarrow, what have you got? A: A big wheel-barrow.

You can’t run through a campsite. You can only ‘ran’ because it’s past tents.

Q: Did you hear about the kidnapping in the woods? A: It’s alright – he woke up. (Definite ‘Dad’ camping joke)

Sherlock Holmes and Dr Watson go on a camping trip together. After eating their dinner around the campfire they retire to the tent to go to sleep. A few hours later Sherlock wakes up.

“Yes sir. What is it?” Answers Watson.

“Look up and tell me what you see.” Asks Holmes.

“And what does that tell you Watson,” asks Holmes.

“Well,” says Dr Watson, ” Astronomically, it tells me that there are millions of galaxies and potentially billions of planets. Astrologically, I observe that Saturn is in Leo. Horologically, I deduce that the time is approximately a quarter past three. Theologically, I can see that God is all powerful and that we are small and insignificant. Meteorologically, I suspect that we will have a beautiful day tomorrow.” “Why? – What does it tell you, Holmes?” Holmes is quiet for a moment then says: “It tells me that someone has stolen our tent.”

I went to buy a camouflage tent the other day but I couldn’t find any.

A: Because Humpty Dumpty had a great fall.

While sitting around a campfire, a boy asks his father, “Dad, are bugs good to eat?”

“That’s disgusting. Don’t talk about things like that over dinner,” the dad replies.

After dinner the father asks, “Now, son, what did you want to ask me?”

I went on a camping trip with my wife, kids, and mother-in-law.

In a clearing not far from the camp, we came upon a chilling sight, the mother-in-law was backed up against a thick, impenetrable bush, and a large bear stood facing her.

My wife cried, “What are we going to do?”

“Nothing,” I said. “The bear got himself into this mess, let him get himself out of it.”

It only cost £5 to get into our local aquarium, as long as you’re camping, or dressed as a dolphin,

So, to all in tents and porpoises, it’s free!

A local farmer helped me into his field to camp with a step over his fence. I like his stile.

We hope you enjoyed our jokes about camping and our camping memes! Check back for updates and follow us on facebook and instagram for more of the same!