At our Sussex glamping and camping sites we encourage campfires. One of the great joys of campfires is campfire cooking and eating alfresco. Grilling or barbecuing meat, fish or veg directly over the flames provides a great meal but there are plenty of other ways to cook on your campfire. Some of the simplest recipes are the best whether they are one-pot meals or foil-wrapped packages. Here are a few ideas to get you started. 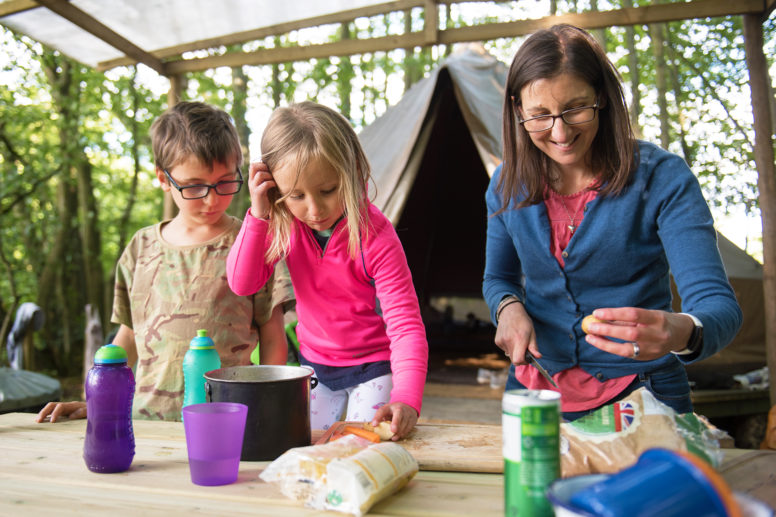 A campfire cooking classic that doesn’t need much explanation. Cook it right and the humble spud can’t taste better: crisp skinned and fluffy on the inside. Just pierce the skin of your potato all over before wrapping it in strong foil twice then set it in the embers of your fire. Make sure to turn your potatoes a few times during an hour cooking time. Top with cheese, beans and a few grinds of black pepper for a hearty dinner. Our tip is to grate the cheese at home and bring it in a Tupperware box so there’s even less to do on site! 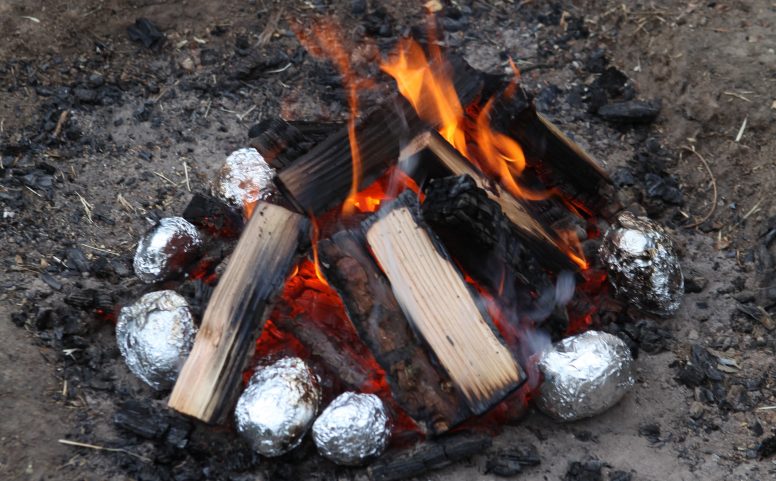 Many of our campers make pasta with pesto on their first night camping. It’s quick, easy and warming, especially good if you are arriving late after a day at work. But how about making your pasta a bit more exciting? A great dish for those who like strong flavours is to mix freshly cooked pasta with anchovies, black olives, fresh tomatoes, sun-dried tomatoes and capers. None of the ingredients require refrigeration and can easily be mixed ahead of leaving home to simply stir in on arrival. A squeeze of lemon and some fresh basil give this dish a lift. 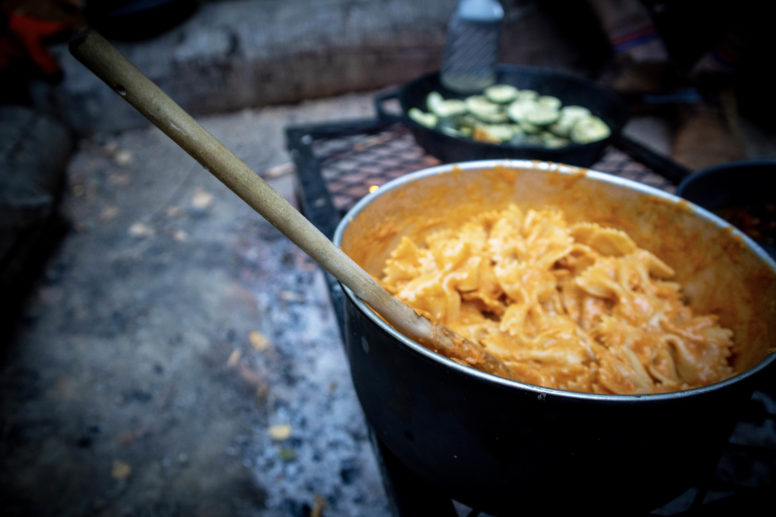 Another campfire cooking classic, a homemade chilli-con-carne is a great campfire dinner as it all gets cooked in one pot. It can be as simple or as involved as you like. In its most basic form just fry chopped onions and garlic, add minced beef until it’s browned and stir in tomatoes, kidney beans and dried or chopped fresh red chilli. Then sit back and relax while it simmers over your fire. 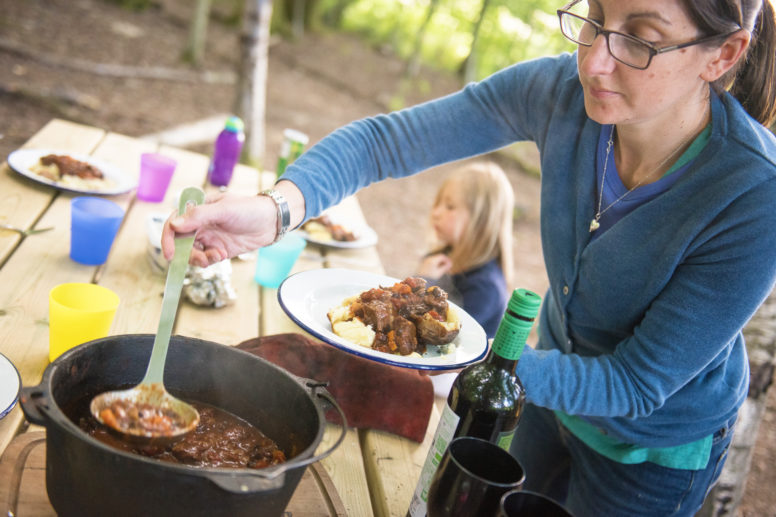 Place a fish fillet on a piece of foil brushed with oil. Smear a thick layer of pesto on top of the fish and a squeeze of lemon, tomatoes, and black olives around the edge of the fish. Make a loose parcel around the fish. Place on a grill over the fire and let it steam for about 30 minutes. Check the fish is thoroughly cooked (the flesh will be opaque) before eating. 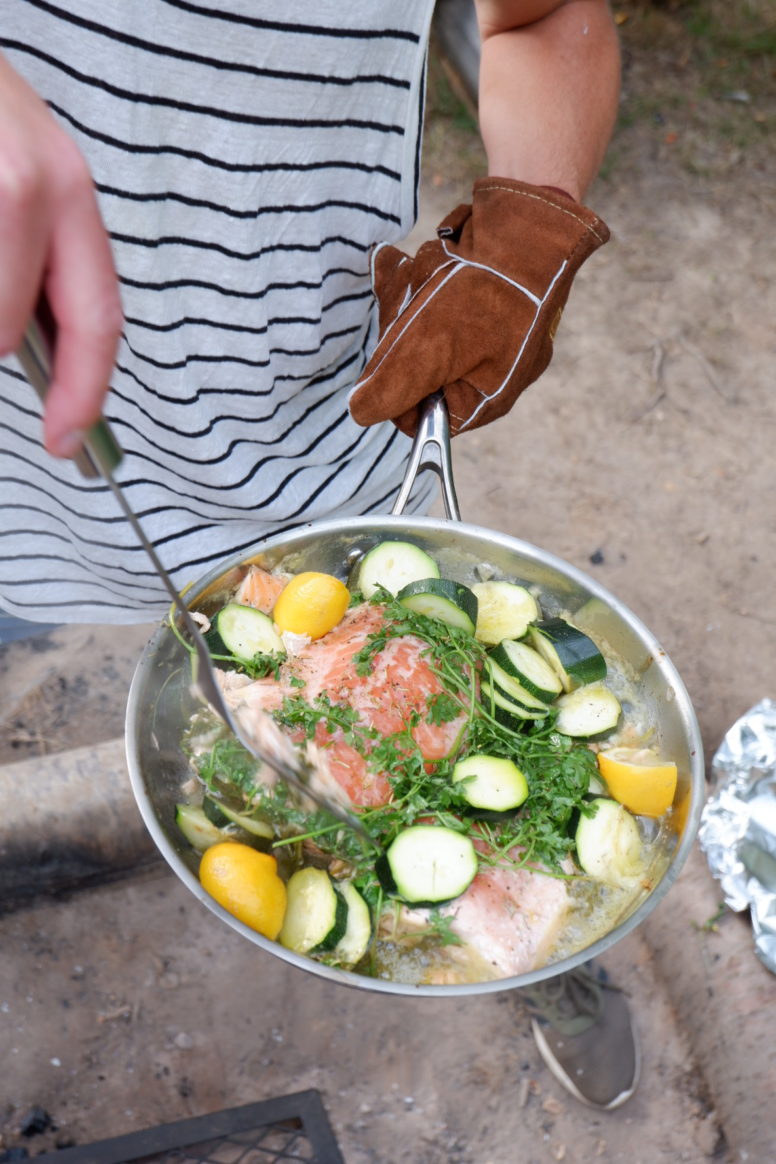 A great meal at any time on the campsite but a real winner for your last supper, lunch or even breakfast as you can add any leftovers to the basic recipe of onions and eggs. Potatoes, peppers, olives, tomatoes, bacon, ham and cheese are all delicious in this sturdy omelette. But almost anything will suffice. Fry the onions in a frying pan with a lid first and then add beaten eggs and any other ingredients you fancy in to the mix. Once the base is cooked put the lid on to make sure the frittata is cooked all the way through. Serve with salad, green vegetables or baked beans. 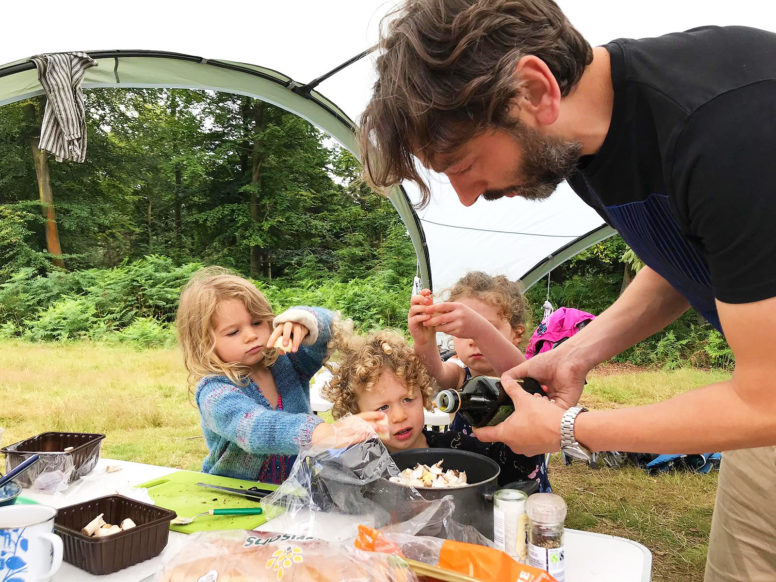 Another foil packet recipe. For this potato dish you’ll need new potatoes cut in half and a tin of chicken soup. Put eight to ten potato pieces on a piece of foil. Dollop around three or four tablespoons of chicken soup on the top and sprinkle on a small handful of cheese. Close the foil parcels up loosely and place on the edge of a fire or on the grill above one. After about 45 minutes, open the parcels and add a bit more cheese. Close them up again and cook for another ten minutes.

A campfire banana split! Not really sure this can be called campfire cooking as there’s not much cooking involved. But it’s definitely worth trying! Cut a banana (still in its skin) lengthways, down the middle, on the inside of the curve. Break up a few pieces of milk chocolate and insert inside the split. Then wrap your banana loosely in foil. Put the banana package on a grill over a fire and let it cook for at least half an hour until the banana is completely soft and the chocolate melted. Serve straight from the foil and eat using a spoon to scoop out the banana flesh. Delicious!

Using the same principle as above, these hot fruits are a lighter (and possibly even sweeter) dessert. Use a sharp knife and a teaspoon to scoop the stone out of a peach. Be careful not to break through the bottom of the peach so you have a kind of cup. Spoon some brown sugar into the hole and wrap the peach in foil. Cook for at least half an hour until the peach flesh is collapsing and the sugar has turned to liquid. Serve with a dollop of crème fraiche.

Each pitch at Wild Boar Wood and Beech Estate Woodland Campsite has a fire pit and we hire grills for campfire cooking. Bell tents also have barbecue utensils and a wok or frying pan as well as a firewood allocation. We also hire cast iron cooking pots called Dutch ovens from our sites – take a look at our top recipes for Dutch ovens for more inspiration.